[Ilda] In the Era of COVID-19, Inquiring after Sexual Minorities

*Human Asia received permission from the affiliated organisation to post the below translation (1/09/2020).

I feel more and more that we cannot go back to the days before COVID-19. We are becoming more fragmented in a society today that demands that people avoid one another. In this status quo, the most vulnerable groups are social minorities, who are trapped in a blind spot.

The sick, the homeless who cannot follow the instruction to ‘stay at home,’ the elderly, caretakers, non-regular workers who have lost their jobs, and sexual minorities are most affected, to name a few. 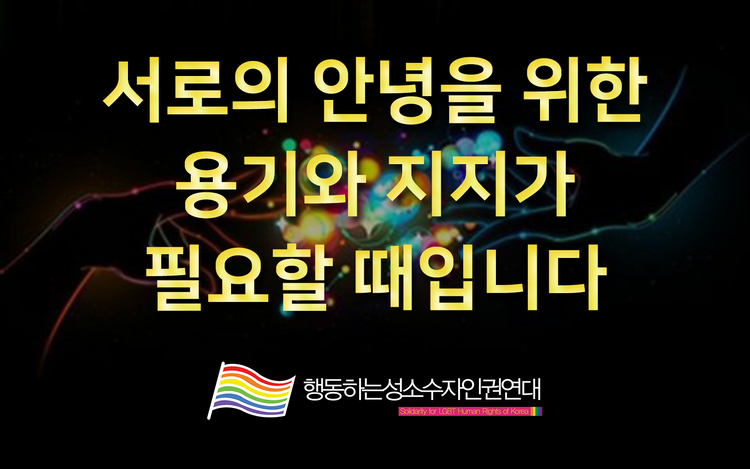 “Now is the time for courage and support for the sake of each other’s health”. Web poster created by Solidarity for LGBT Human Rights of Korea

Last March, the Human Rights Campaign (HRC), a US sexual minority rights group, released its “LGBTQ COVID-19 Crisis Assessment Report.” According to the report, almost 40% of sexual minorities hold jobs that are most affected by COVID-19, such as in the restaurant, retail, educational and medical industries. This amounts to almost 5 million out of the total of 14 million sexual minorities in the US, which is a relatively higher percentage than the 22% of the non-sexual minority group.

The total percentage of those who identify as LGBTQ+ working in restaurant businesses is 15%, which is especially higher compared to 7% in the education and medical business, and 4% in the retail business. This means that many sexual minorities work as waiters or bartenders, where barriers to employment are relatively low. The US forbade restaurant operations in about 15 states after the number of confirmed COVID-19 cases increased. As a result, a great number of workers lost their jobs in an instant.

The situation in Korea is not so different. The self-employed working in the restaurant business were hit hardest and many of the jobs held by part-time workers and freelancers have vanished.

It is challenging to analyze in what field sexual minorities are working and how they are affected by COVID-19, because the total population of sexual minorities in Korea is not counted. Nevertheless, it is possible to make inferences from a few collected data.

A look at the 2014 ‘Survey of Discrimination Based on Sexual Orientation and Gender Identity’, released by the National Human Rights Commission of Korea, offers some starting points to consider. A total of 948 respondents participated in the survey (858 people who identify as gay/bisexual, 90 people who identify as transgender). The survey results indicate that the ratio of full-time workers is significantly lower, while the ratio of self-employed people is relatively higher compared to the entire economically active population.

The book Queers Are Working Next to You (written by Hee-jung, published by May Book) which interviewed about 20 sexual minorities in their 20s and 30s on the theme of labor, also points out that sexual minorities have “to give up on too many jobs”:

“Presenting and passing with given gender norms is a much more complex performance than one might think. It does not suffice to just put on a skirt and make-up. A feminine/masculine physique, body type, gait, posture, attitude, etc. are all deemed as necessary. All of these must be ready before entering the workplace… Kyu-won (cis woman, bisexual), who just graduated from university, is living as ‘freeter’ (someone who sustains their lifestyle with non-regular work). She never even thought of finding a regular job, because most workplaces want Kyu-won to present fully as ‘female’.”

In addition to the trans community, those who identify as gay and bisexual are often refused employment due to the discrepancy between their designated gender and their appearance, physique, clothing, speech and/or mannerisms. Even if they are employed, they are forced to act “feminine/masculine” and are even bullied if they do not comply. The distinct gender roles and patriarchal workplace culture of asking whether they have a boyfriend or girlfriend or if they are married are also related to the low percentage of full-time wage earners among sexual minorities. 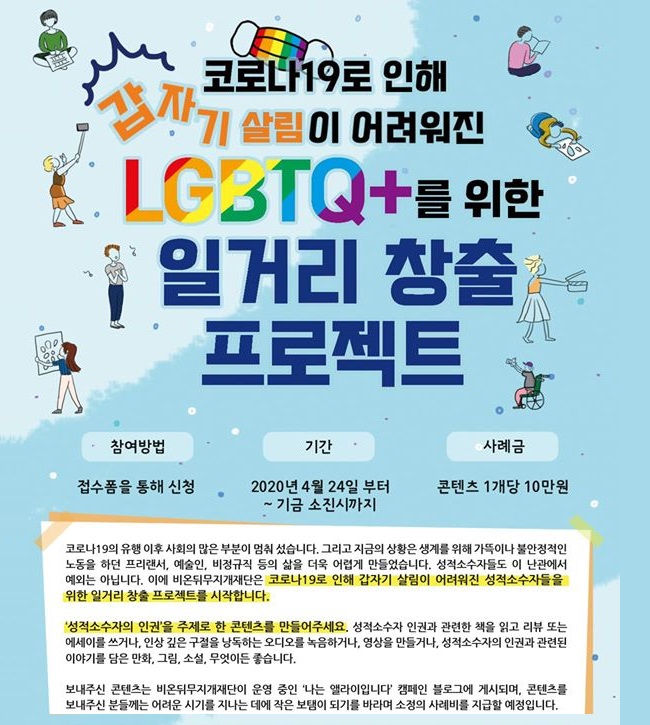 According to Sun-yeong, the secretary-general of the foundation, this project was drafted from the thought that “there must be sexual minorities among impoverished people; in a blind spot where government support does not reach.”On April 21, the Rainbow Foundation initiated the ‘Let’s create work opportunities for our LGBTQ+ community which has suddenly faced hardships with COVID-19!’ project. Applications, however, were closed down within a day due to an overwhelming number of applicants.

“After deep consideration, the job creation project assumed the method of paying rewards to those who sent in contents on sexual minority rights, out of the belief that it is not a good method to have applicants prove whether they are sexual minorities or how difficult their life has become.”

Originally, the project intended to provide 100,000 won each to around 40 applicants, but the application process was urgently suspended when more than 80 applications poured in between Friday at midnight and 9 AM the following morning. Overwhelmed by this enthusiastic response, Secretary-General Sun-yeong said, “I expect many more people intended to apply. Unfortunately, fundraising is needed for more support, so we are now discussing how to proceed.”

Meanwhile, teenagers who were kicked out of their homes due to their sexual identity or ran away from abusive homes and took part-time jobs are facing more vulnerable situations after COVID-19. 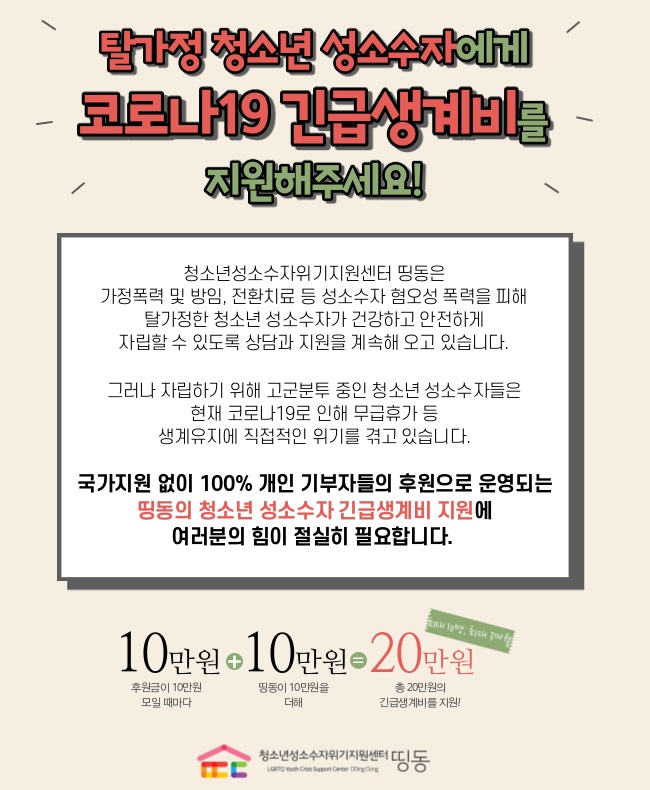 For those more vulnerable to loneliness and isolation

Homeless teenagers are being excluded from usually household-oriented government support policies, thus making it harder for them to overcome economic difficulties. This means that the economically vulnerable are continuously pushed to blind spots in times of crisis.

In the COVID-19 era, people are asked to refrain from face-to-face activities and to keep “physical distance”. But for those whose community activities or gatherings are not just hobbies or recreation but the sole channel of communication, physical distancing can mean social isolation. For some, self-quarantine can mean more than just staying at home; it can mean breaking off from society.

According to the “Key Results of the South Korean LGBTI Community Social Needs Survey” by Korean Gay Men’s Human Rights Group, Chingusai released in 2014, around 20.3% of all respondents answered that, among the important people in their life, “nobody knows” of their sexual identity (such as lesbian, gay, bisexual, transgender, intersex, etc.). Others replied, “almost nobody knows” (27.6%), “some know” (32.9%), and “all or most know” (19.3%) of their identity.

When asked specifically about co-workers, the percentage of those who replied “nobody knows” soared to 57.7%, while in the case of friends and teachers from school, 47% said “nobody knows” and 31.6% said “almost nobody knows,” which add up to approximately 80%. 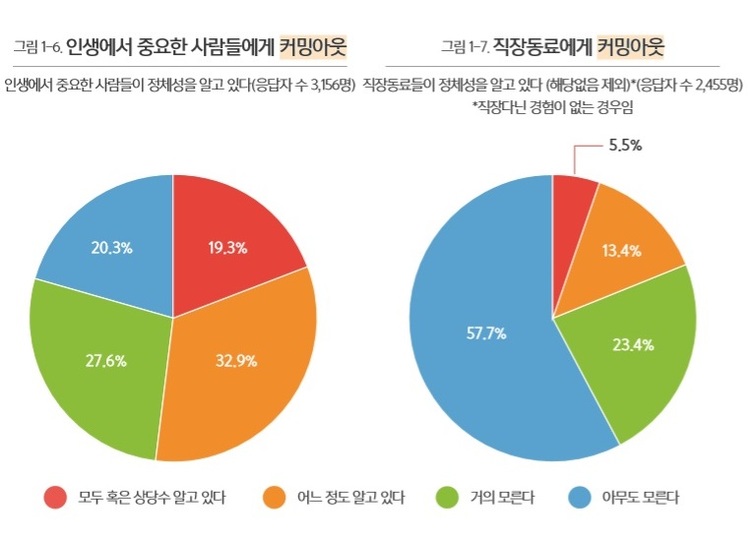 The ratio of LGBTI who came out to important people in their lives and coworkers. The table on the left shows respondents’ answers about important people in their lives in general, while that on the right shows their answers about their coworkers. Red corresponds to ‘all or most know’ and the colors to its right represent increasingly lower levels.
(Source: Key Results of the South Korean LGBTI Community Social Needs Assessment Survey, 2014, Korean Gay Men’s Human Rights Group “Chingusai”)

The reasons for not coming out are deeply related to discrimination against sexual minorities. A majority of the respondents – 66.4% – replied that violence, abuse, or neglect by family members or relatives occur “often” or “sometimes.” In addition, 67.7% answered that mockery, discrimination, or violence happens “often” or “sometimes,” and only 13.3% replied this “never” or “rarely” happens.

Applicants further replied that they would not report it to police even if they suffered discrimination and violence because “they do not want to publicize their sexual orientation/gender identity” (67.4%) and “nothing would change even if they reported it” (61.9%). They are living with anxiety that even people close to them and law enforcement will not protect them.The reasons for not coming out are deeply related to discrimination against sexual minorities. A majority of the respondents – 66.4% – replied that violence, abuse, or neglect by family members or relatives occur “often” or “sometimes.” In addition, 67.7% answered that mockery, discrimination, or violence happens “often” or “sometimes,” and only 13.3% replied this “never” or “rarely” happens.

Being unable to come out to even the most important people in their lives and having to live in disguise can translate into loneliness and isolation.

The results of the 2017 “Korean Adult LGB (Lesbian, Gay, and Bisexual) Health Study” jointly conducted by Kim Seung-sup, a professor of health policy management at Korea University, and Chingusai, also reflect this tendency. Compared to heterosexuals, those who identify as gay or bisexual are 7.51 times more likely to think of committing suicide and 9.25 times more likely to try committing suicide. Symptoms of depression were also about 4.76 times more common.

In early May, after social distancing policy had finally relaxed to “distancing in daily life” measures with no new cases of COVID-19 confirmed in Seoul for several days, the entire nation was put back into a state of emergency due to a mass infection centered on Itaewon clubs during a long holiday weekend.

At a time when rapid prevention measures were crucial, several media outlets aggravated the situation by releasing irresponsible reports that excessively connected specific places to gay communities and intruding on the privacy of patients diagnosed with COVID-19. These reports not only failed to stop the spread of COVID-19 but even contributed to encouraging hatred towards sexual minorities. Although Itaewon clubs are not exclusive places for gays, the fear of disease was projected onto sexual minority communities, which added to their reluctance to get tested.

Sexual minority human rights groups urgently organized the “Queer Action Against COVID-19 (COVID-19 LGBTI Emergency Countermeasure Headquarters)” and held a press conference at Chingusai’s offices on the morning of May 12th. The group promised to cooperate with local governments and quarantine authorities to help those who are subject to testing overcome their anxiety [of possibly being forced to come out]. It also emphasized the importance of ensuring that sexual minorities are not penalized for their identities during quarantine and treatment periods. 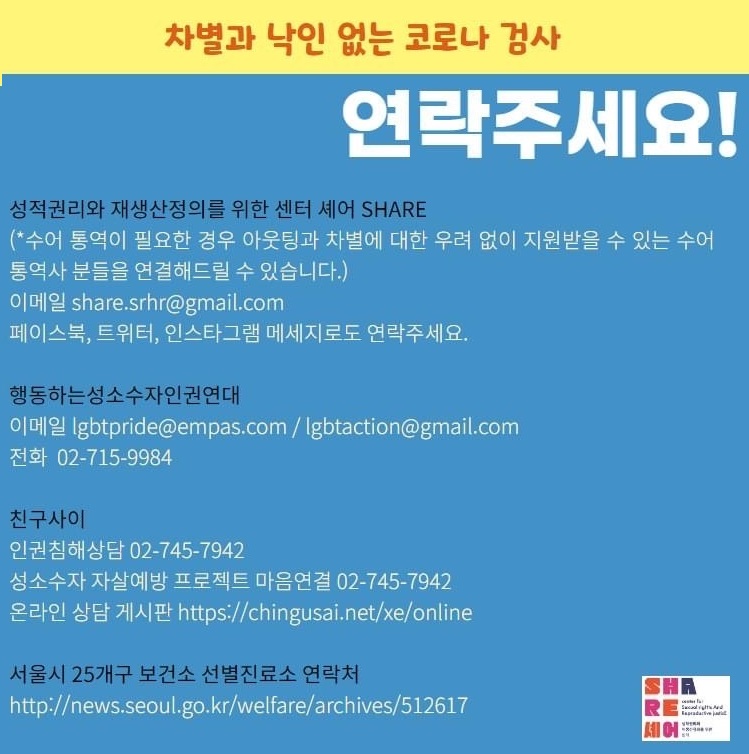 Poster created by the Center for Sexual Rights and Reproductive Justice, SHARE.

The activist Chang-gu from “DAWOOM: Together4Change (LGBTQ Human Rights Organization of Youth Generation in South Korea)” explained, “In Seoul and Gyeonggi Province, the keywords ‘Itaewon’ or ‘Nonhyeon-dong’ alone can be given to get tested, not requiring [the patient] to name specific business names. If you are tested in Seoul, you can just leave your phone number and receive serial numbers and get tested anonymously to minimize the disclosure of your personal information.”Chingusai, Solidarity for LGBT Human Rights of Korea, Youth PLHIV Community of Korea “R,” and Youth Crisis Support Center “DDing Dong” provide information on the COVID-19 examination procedure, offer personal counseling, and respond to exposures of personal information.

“Queer Action Against COVID-19” emphasized, “It is a time when we desperately need the strength of solidarity,” and added, “Don’t be secluded, look after each other, and gather the courage to embrace each other in the face of hatred and criticism. I hope we can all go back to our normal daily lives, asking how everything is with a healthy smile.”

“We are now all undergoing a hard time due to COVID-19, but I believe this can be a chance to have sexual minorities accepted as equal citizens through bracing against the crisis together,” said Na-young Jung, an activist in Solidarity for HIV/AIDS Human Rights “Nanuri+” and added, “Through this hardship, sexual minorities have been able to gain more courage, and are willing to raise capacity to be accepted as equal citizens, protected by society.”

As we are now preparing for the post COVID-19 era, we should leave behind the age of old-fashioned stigmatization and exclusion and seek solidarity for safety and human rights more than ever before. What we need is to find a way to keep our physical distance from each other but stay connected.