The Revision Plan on the Abortion Law: Still a Step Backwards for Women’s Rights – Jihyeon Bae 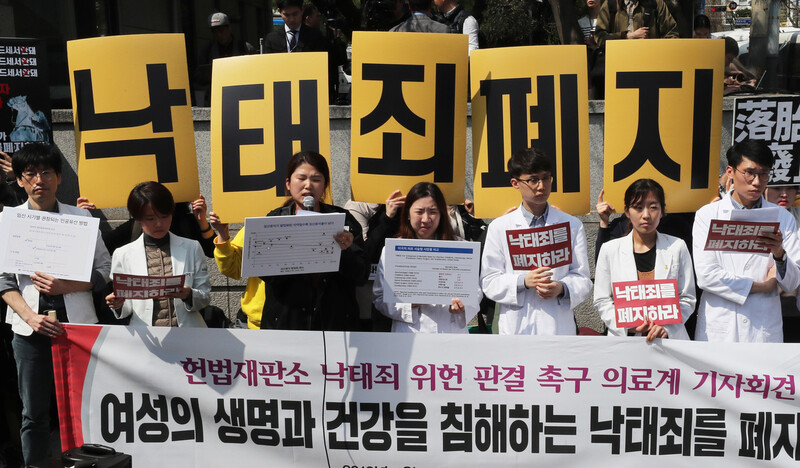 On April 11, 2019, women in South Korea were finally released from becoming ‘criminalized bodies’ after 66 years living under an abortion ban. On this day, South Korea’s ban on abortion was ruled as unconstitutional. The Constitutional Court ordered that the law must be revised by the end of 2020, stating: “This constitutes as an excessive infringement upon women’s right to self-determination. (…) As such, relevant articles of the law must be revised by Dec. 31, 2020.” Right after this historic court decision, pro-choice campaigners waiting in front of the Constitutional Court cheered and celebrated in tears, hugging one another other. Womens rights groups welcomed the end of abortion law, declaring a ‘victory’ for all women in South Korea. The only matter was whether the court’s ruling would be fully accepted and implemented properly.

“We didn’t see it coming”

In October 2020, the South Korean government announced its revised plan on abortion law. It was a step backward from the court’s initial decision. The law authorizes unrestricted voluntary interruption of pregnancy up to 14 weeks and in cases of rape, danger to the mother’s health or on ‘economic and social grounds’, up to 24 weeks. Yet still women’s bodies remain regulated by ‘weeks’ and illegalized by the revised law. The revision plan further remains solely focused on ‘punishing women’ and offers nothing on how safe procedures should be conducted if women choose to get an abortion. The government plan is therefore facing harsh criticism by feminists and pro-choice campaigners. After the government’s plan was revealed, they felt betrayed, saying “We didn’t see it coming”. Their declaration of ‘victory’ was too soon, they said, resolving to fight on.

“Why is this plan a step-back?”

Some people would wonder why this revision plan is a step back for women. There are 4 main reasons as to why this revision plan is problematic, according to Kwon In-sook, a lawmaker in the ruling Democratic Party. Firstly, unwanted pregnancies are never just the woman’s fault. In the process of pregnancy, a man is also and always involved. However, only the woman is punished and demeaned by the law, and there are no consequences for men. “In the matter of the abortion, there is no such thing as being permitted or not by the government or the law – because nevertheless, women will be forced to confront whether or not they should get an abortion regardless of it being legal.” Kwon stated. Secondly, under the government’s plan, abortion can be still a crime after 14 weeks of pregnancy. Operation charges become more expensive and after the abortion, if something goes wrong with the women’s body, they cannot consult on these problems with doctors. In a nutshell, there are still no concerns for women’s health if she chooses abortion, but only a punishment. Thirdly, with the court’s decision, the current abortion ban in the criminal law is already nullified, but this revision plan remains discriminatory to social minorities. The revised plan states that based upon ‘economic and social grounds’ abortion can be allowed up to 24 weeks. But again, the women does not have autonomy over her own body – it is the government that judges the economic and social grounds of individuals and decides whether abortion is permitted. This is problematic because every woman is different. Every woman faces different conditions and situations. How could the government judge for every individual and how could there be unwavering standards? Finally, the ambiguity of the benchmark “14 weeks” matters, especially for teenagers. Kwon noticed that teenagers often do not understand or realise that they are pregnant. Some further try to deny their conditions. “I saw a lot of cases for teenagers, who didn’t understand their pregnancy and the meaning of their changing bodies. In one case, a teenage girl noticed her pregnancy only after 6 months later.” Kwon added. The government’s plan also has a regulation for underaged women: that they should get permission from their parents. If the government thinks that teenagers cannot make their own choices, there surely there should be exception for them in regulating the weeks of pregnancy. But still, there are no exceptions for teenaged girls from being a ‘criminal’. For these reasons, from this August, Kwon insisted to propose a revision to completely legalize abortion. The government did not accept this recommendation. Kwon therefore introduced her own version of a revision bill to completely lift the abortion bill in the hopes of it being noted in the future.

Now, the ball is in the National Assembly’s court. There is the revision plan created by the government and alternatives plans proposed by lawmakers such as Kwon-In sook. Kwon’s plan seems to be the most favorable plan for women’s rights, along with other recommendations which still regulate women’s freedom of choice on their own bodies. I still remember when President Moon Jae In declared himself as a feminist during the election time. But what the government gave women in actuality regarding the matter of the abortion ban was a great disappointment. This decision is not only a backward step from the constitutional court’s decision, but also a backlash that tries to suffocate women’s voice again calling for “My body, My choice”. Although COVID-19 makes it hard to assemble and protest in crowds outside, it is now high time to fight back. The National Assembly will soon begin the process to pass these proposed bills. We must raise our voices now – put pressure on the assembly to legalize abortion and make our society here in Korea more gender-equal for the women in the next generations. Therefore, now is the ‘golden time’ for women’s rights.

[Korea JoongAng Daily] Ban on abortions to be lifted, but only partly – https://koreajoongangdaily.joins.com/2020/10/07/national/socialAffairs/abortion-Criminal-Act-revision/20201007183600419.html